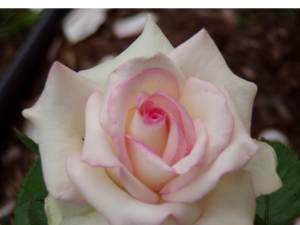 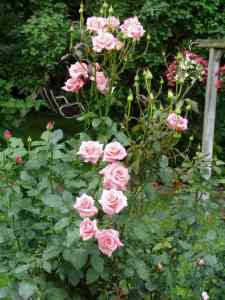 LEADING LADY opened her eyes, declared that the stage lights were finally on, and took several bows. However, It was really TUSCAN SUN waking everyone to a warm and shiny day. Always slow AWAKENING, VEE MARIE yawned and wished for a cup of HOT COCOA. CAREFREE BEAUTY began to feel like a CAREFREE SPIRIT and GOLDEN WINGS was sure she could fly OVER THE MOON. Shy little MARY ROSE produced very loud GIGGLES when a bumblebee tickled her stems. THE DARK LADY flaunted her FLAWLESS beauty, sure that she would be Queen this year. There is such AMBIANCE in the spring garden, but what a CONUNDRUM – it’s only February!
HELEN TRAUBEL began an aria from her favorite opera, TRAVIATA, and RURAL RYTHYM chimed in with a chorus of Gershwin’s “I’ve Got Rythym.” SHOWBIZ, a real FANCY DANCER, did a little WHIRLAWAY with SASSY CINDY, and VETERAN’S HONOR marched to DISTANT DRUMS. LIBERTY BELL rang loud and proud. ABRAHAM DARBY, that JOLLY GOOD gentleman from GLAMIS CASTLE, reminded everybody that it wasn’t time yet for a GOLDEN CELEBRATION. The BRASS BAND played on and FOOLISH PLEASURE continued.
PLAYBOY was ready to flirt, and captivated SEXY REXY which made MORDEN BLUSH and HOT PRINCESS sputter that she was feeling totally ignored. GRAHAM THOMAS began TEASING GEORGIA but she only had eyes for THE PRINCE. HANNAH GORDON and NICOLE were still arguing over who was who, while ST. PATRICK simply prayed for PEACE. QUIETNESS called for TRANQUILITY. DAINTY BESS smiled and with a TOUCH OF CLASS, reminded the mischief-makers that they need to become FOREVER FRIENDS.
PARTY GIRL was DANCING IN THE WIND, shouting “isn’t this just the BEE’S KNEES?” THE SQUIRE gave her a sour look. JEAN KENNEALLY said her HOPE is that the sun never goes down because THIS IS THE DAY. GOLDEN SHOWERS tried to warn that OUTTA THE BLUE, there could still be a freeze. BETTY BOOP said it’s only FOLKLORE that spring can’t come this early. FRU DAGMAR complained “this just can’t be – I still have to lose my hips!! “
As MARMALADE SKIES gave way to an ARIZONA SUNSET, there was general agreement that today had been FABULOUS and such a DOUBLE DELIGHT. POPE JOHN PAUL II gave thanks and assured them that THE NEW DAWN would be SIMPLY MARVELOUS and filled with JOY and HAPPINESS.

The Spring That Sprung by Bill Blok
We usually have talked about March as the month that comes in like a lion, but goes out like a lamb. This year there were not the usually lion-like snow storms, but lots of warm weather of record breaking proportions. Lots of tornadoes in the south, and a few in eastern Michigan, but otherwise we had mostly record breaking tropical weather.
Usually we wait until the weather warms in early April to remove our rose cones, but this time the weather was warm already in early March. When the weatherman predicts frost-free temperatures in the coming 7 or 8 days, I take that as a signal to remove our rose cones. This year that happened during the first full week of March, but I did not have the faith to act upon it. The first Monday after our March 17 District Convention, I started removing our cones, and finished it on March 21. Most of the cone covered roses had green shoots of 2 or more inches long.
Pruning roses that are covered with new growth is no picnic. It is hard to see all the black stains on the canes that signal the likelihood of more dieback in the near future. It also takes a little more courage to cut back more new growth to improve the symmetry and openness of the rose bush.
Seven custom budded maidens (unnamed hybrids) arrived from Wisconsin Roses on March 27. They were promptly planted. Unfortunately three new named rose maidens and 50 rootstock seedling that were ordered in October did not arrive. My e-mail order apparently was misplaced. Steve will check to see if he still has stock in those items.
After the mild to hot weather we enjoyed in early March, the weather in the last week and a half of March turned cool to downright chilly. As of the end of March we avoided any hard freezes, but we did suffer 3 or 4 frosty nights. Some good rains were welcome, and the lawns really greened up.
I finished pruning our rose beds on April 2. That is, I think I am finished. When you have as many bushes as we have, it is not uncommon to find a bush or two that were overlooked in the first go over. When our weather cooled off during the last 10 days of March, we had 3 or 4 nights where we had light frosts of between 30 and 32 degrees, but we saw no obvious signs of frost damage on the roses. We hope that damage free nights may continue.
Although we usually apply crabgrass preventer fertilizer to our lawns in mid April, we applied most of our preventer in mid to late March. It occurred to me that, though it was early, with the record breaking warm weather in March, we needed to get it down before the warm soil germinated the crabgrass seed. I still had a bag ot the preventer fertilizer left from the first application, and I applied it during the 1st week of April. Whether it is necessary for the crabgrass prevention, I don’t know, but at least the fertilizer portion was useful for the fast growing grass.
When I am finished pruning our roses, the next pressing need is to apply fertilizer to our rose beds. Formerly I used the Schultz’s time release fertilizers that were commonly sold in the 4 lb. boxes for around $2 per box. Unfortunately, it is not being sold that way any more. Osmocote or similar coated commercial time release fertilizers are still available, but at 2 or 3 dollars per pound. The result is that we have been using balanced non-coated fertilizers in recent years. This year we are using 19-19-19. I spread a 7 or 8 ounce tumbler of fertilizer around 3 or 4 large rose bushes. I use pH paper to test the acidity of my soil. If my pH is near 6 or below, I apply about the same volume of pulverized limestone to these same bushes. Above a pH of 6 and below a pH of 7, is supposed to be about ideal for roses. I will hope to repeat the above fertilizer application in mid May, possibly after our bark mulch is
applied to the rose beds.
Although we usually wait until mid May to start our fungus preventive sprays to our roses, very likely we will need to apply a good fungicide by May 1, since the fungus spores got an early start this spring. If you wish to avoid paying a small fortune for a lifetime supply of Banner Maxx spray, the less expensive fungicides such as Bayer Rose Disease Control, and Spectricide Immunox Disease Control spray is still being sold in local garden centers for between $12, and $15 for a season’s supply for most rosarians.

A Find at Home Depot

Shopping For Roses by Bill Blok
On April 5, Alice Otter called to tell me that she was surprised to find one of her favorite roses being sold in the Kentwood Home Depot store. It was Pink Promise, in #1 grade bushes. It was one of those contribution roses, where a small amount of the price was being donated to the fight against breast cancer.
Alice Otter won the 3 of a kind class with this rose in our Fall Show last year. For her, it rates right up there with Moonstone. It is somewhat similar to Moonstine, an off white with a pink inner swirl of petals. I personally don’t rate it quite up to Moonstone, although it has good form and excellent substance.
Alice urges interested people to shop early for these packaged roses. Especially considering the warm weather we have had earlier. Packaged dormant roses don’t wear well on the store shelves. If you are looking for new roses, as opposed to old favorites, you will find the picking slim among packaged roses, but every once in a while you find a pearl.

Multiflora Rootstock by Bill Blok
On April 4 my delayed order of maiden roses and multi-flora root stock arrived from Wisconsin Roses. These are seedlings advertised to be 1/8th inch in diameter, but some are smaller. I line them out in our garden about 10 to 12 inches apart. When these seedlings are properly grown in the greenhouse, they are grown with restricted lighting, to cause them to elongate upward. Ideally the grower tries to lengthen the upper portion of the root, which is the best grafting surface. When I plant these seedlings, I remove any roots that are on the upper 2 inches of root surface, while burying the remainder of the root in my garden soil. When well watered and fertilized, these tiny seedlings increase in diameter to about pencil size or larger by early August. August and early September are the best time for grafting on these multi-flora seedlings.
Early in my grafting career, following the advice of people who lived in other parts of the country, I tried to graft on multi-flora cuttings that I had rooted for that purpose, but had little success. I also tried to graft on standing multi-flora canes, also with very little success. Pallek, our Canadian rose supplier in the 80’s and 90’s, also sold rootstock seedlings, and I bought some at about 20 cents each. Now, with a U.S. source, the price is 80 cents each. There were years that I made 30 or more grafts, and only had 1 or 2 “takes”. People who are good at bud-grafting, like Steve Singer, probably get a 90% take, using rubber bands. I currently use paraphin tape, called Buddy Tape, and get probably about 50%. Not good, but better than before..

Nor’East Rose Pick-up
We expect our rose order to arrive on May 1. We think you will be able to pick up your orders May 2 – 5 at Blok’s house. Call us when you plan to come get them. Additional orders, or orders not prepaid by April 1, are $5.25 each. After repotting the price is $5.50 each. Expect increased prices beginning June 1.
Contributions of 4 to 5 inch pots are welcome, for the repotting process.